What is SCCM and How is it Used? 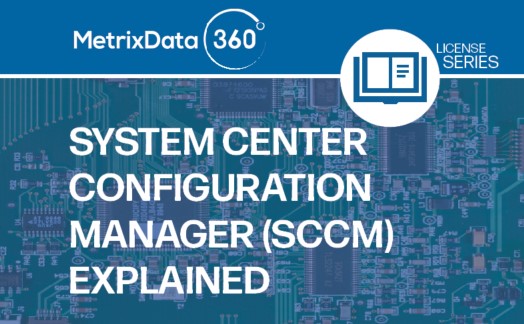 SCCM: what it is, what it does, and how it helps with your software asset management (SAM) solution

It is well known in the tech industry that Microsoft has created one of the most complicated software licensing schemes in the market; one only needs to take a look at Microsoft’s SQL Server licensing to see that much. Not only are their licenses hypercomplex, but they are also subject to change frequently. If you are a large organization, this means that a single change in licensing could affect thousands of products throughout your software environment. It can be a nightmare and a seemingly insurmountable task to manage this kind of complexity, which is why it is important to be aware of the tools that you have at your disposal to help you in this struggle, such as Microsoft’s very own SCCM.

At MetrixData 360, we are well versed with Microsoft’s products, including SCCM.

So, in this article, we will look at Microsoft’s SCCM; what it does, what it is good for, and how it can help you improve your software asset management solution within your company.

SCCM was originally published in 1992 under the name System Management Server (SMS); however, in 2007 it was renamed System Center Configuration Manager (SCCM) and may also be called ConfigMgr. SCCM can be described as a Microsoft management tool, meant to provide users with the ability to manage a large number of Windows-based computers.

Administrators using SCCM are given the ability to manage deployment and the security of devices and applications over a large and intricate enterprise software environment. Many administrators also use SCCM as an extra layer of security with the ability to create automatic patching. However, SCCM comes with many other features including remote-based control, patch management, operating system deployment, and network protection, just to name a few of its many features.

A free trial of SCCM is available for a short time; however, a license is required after the free trial has expired.

SCCM uses a single infrastructure to do its job, placing virtual machines, mobile devices, and physical machines under the same umbrella, giving the administration team control over a wide variety of tools and resources, either on the cloud or on sites. It allows the administrative team to discover service, desktops, and mobile devices connected to the network through the Active Directory and manage those deployments and updates on a device or group basis.

SCCM is often confused with Microsoft System Centre Operations Manager, SCOM. However, while they serve similar roles, these Microsoft products are not identical, SCOM allows administrators to monitor the health and performance of their IT environment, performing tasks such as deploying and managing operations, services, and applications within a software environment.

Both SCCM and SCOM exist as part of a larger family of products better designed to assist admin to manage applications and services, however, SCCM helps to primarily maintain the infrastructure security and make sure everything is up to date while SCOM monitors the services and devices and then shares that information in regards to your requirements.

What Can SCCM be Used for?

SCCM has a wide variety of uses including the ability to manage updates, provide a layer of protection against outside sources, deploy software, and can even protect you against compliance issues.

Since it provides you with such a wide variety of data, you can use SCCM to organize your software environment. You can also configure automatic alerts and automatic tasks to ensure you are updated on the status of objects and to ensure tasks are completed on time.

While most organizations only use SCCM as an IT tool, it can also provide a wealth of information for software asset management. This is because SCCM will store inventory data that can be used to track assets.

One simply needs to ensure that SCCM is freed up using a web-based multi-tenant asset management system which will allow SCCM to be used for tasks beyond the IT Department, such as HR procurement and security. SCCM can provide you with the ability to plan and proactively dig down deep into the data of your software environment in order to ensure compliance and lower the risk of receiving a Software Audit, which can prove a costly and unbudgeted expense in these troubling times.

Related: Getting ready for a software audit? You can prepare by checking out our Software Audit Defense Procedure

Of course, there are limitations to SCCM since it can only provide you with so much information in a raw format. Often companies will use SCCM during the beginning stages of their software asset management solution in order to gain a footing before eventually migrating to a specialized SAM solution.

Getting a Handle on Your Software Asset Management Strategy

Software asset management is a difficult task for any organization with an intricate software environment. It is important therefore to ensure that you have every available tool at your disposal to help you achieve this goal. Not many companies consider SCCM as a valuable tool in their efforts to reach compliance and optimization.

At MetrixData 360, we often use our client’s SCCM tool to assist in our efforts to gather our data, which, in turn, ensures our customer’s compliance, optimization, and software licensing confidence. If you would like more details about how MetrixData 360’s approach can save you big on your software expenses, you can check out our SAM COMPASS service page by clicking the link below.