Getting Ready to Certify Your ULA 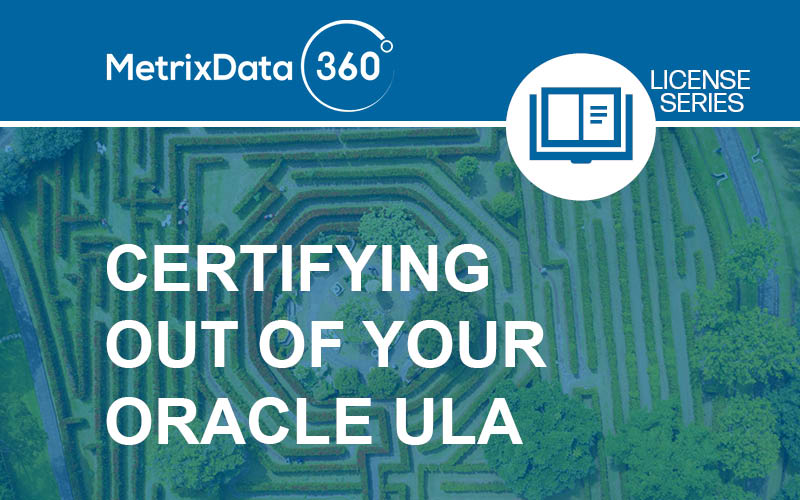 Oracle’s ULA: Ready to Leave or Willing to Stay?
Consequences of Both

When your company is in an Oracle Unlimited License Agreement (ULA), the deal is that you hand over a single up-front payment and you get access to the licenses for a select set of Oracle products. With the volatile market, you may be asking if you should certify your ULA, and what it takes to complete an Oracle ULA Certification?

Of those select products, you can order an unlimited number of licenses for a set period of time, either three years or five years. The only costs in between renewals are the maintenance fees, which are 25% of the cost of the license. There are many reasons an organization would find this set up appealing:

Despite these advantages, the ULA can also be restrictive or even a trap for your company. Organizations might get into a ULA with the best intentions and end up staying in one simply because it’s easier to renew than to leave.

There may come a point where the maintenance fees no longer make the ULA a suitable option and you think about getting out of the agreement.

At MetrixData 360, we have been working through tricky licensing agreements with Oracle for many years and we want you to know what you can expect and how you can prepare.

Why Certify Your ULA?

Signing up for a three-year business plan is a great strategy for times of stability and predictability. However, COVID-19 mixed with its following recession and the threat of a second or third wave means that flexibility and the ability to roll with the punches will be a critical element to future business plans. This is something that the rigid structure of the ULA doesn’t provide.

Freedom: Flexibility has become essential as our world is rocked by constant uncertainty but also when it comes to the constant shift of technology. The ULA is rather rigid in the products you can pick from, and if new products are released that would fit your organization better, you wouldn’t be able to simply add it to your ULA. When you are in your ULA, you will also experience pressure from Oracle towards products that don’t fit your needs but suit their agenda. ULA customers often experience pressure to move to Oracle’s Cloud products, for instance. You will also find that trying to negotiate the price and products of your ULA is particularly difficult. Getting out of the ULA, even temporarily, will give you the freedom to explore your alternatives.

Few businesses have gotten out of the pandemic unscathed and many people’s top priority is to pinch pennies for short term cash flow and avoid costs wherever possible. Extending your ULA can often be more costly than simply certifying out, especially when you take into account the fact that support costs can add up over time. This rising expense comes with no added value, Oracle is simply increasing the prices on products you may not even be using because they know you are chained to your chair. If you certify out now, you can also simply sign up for another ULA later when things are more stable.

Staying with the ULA

Oracle hasn’t been faring very well during 2020, as their Q4 report for 2020 has revealed with its release in mid-June. It doesn’t help that May, which was traditionally Oracle’s most lucrative month, was also the worst month of the pandemic.

Oracle is currently faced with record low numbers and many customers are worried this will result in more audits. It certainly won’t result in fewer audits.

While the products within your ULA might be safe, the products that are not a part of your ULA will be targeted. Since you have a ULA, members of your organization could have easily gotten mixed up about which products are covered under the ULA and which are not, meaning that you may be targeted for unlicensed products thinking that they were safe under the ULA.

When it comes to their ULA users, Oracle tends to be rather lenient and leaves you to your own devices (pun intended). You’re left in charge of keeping track of your own licenses and Oracle rarely bothers to check up on you.

Many organizations, as a result, tend to lose track of their deployments. Employees will install Oracle products after having been granted little or no authorization, resulting in sprawl and shadow IT.

As a result, when you are certifying out of your ULA and it comes time to declare how many licenses you have, Oracle will suspect that your declared number is little more than a guess. After losing the ensured revenue from your ULA, Oracle will happily make up for the losses by checking the state of your sprawl for potential compliance gaps.

At the end of the audit, they might even propose you renew your ULA instead of paying for the compliance gap they find. In other words, once you certify out of your ULA, it’s safe to assume an audit will be coming your way in 6 to 18 months.

What Do You Need To Do Before You Certify Your ULA?

Before you get excited and drop the news on Oracle that you’re letting them go, you’ll need to make sure you have everything ready for your departure.

It’s best that you start preparing for your exit well ahead of time, at least 12 months before your ULA is up for renewal. There’s nothing in your contract that says you can’t hand in your certification for your ULA much sooner than the expiration date, and the last thing you want to do is run past the due date and be forced to renew.

2. Understand How You Certify Out

The certification process itself is quite simple. You merely need to write a letter signed by a C-level executive of your company, complete with the number of licenses you are certifying, and it needs to be submitted within 30 days of your ULA’s expiration. Finding those numbers, on the other hand, will be easier said than done.

3. Tell Your Team You Are Certifying Out

Communication between departments is not always top priority in large organizations. It’s important you convey that you are getting out of Oracle’s ULA to any employees who might install Oracle products with the same carefree attitude they expressed while the ULA was still in place.

4. Take Inventory and Perform a Self Audit

This will be the quickest way to decide whether certifying out is the best thing for your business right now. It will keep you from having to guess your usage and exactly how much you’ll save by leaving your ULA.

A self-audit will also ensure that you are compliant with any contracts you have with Oracle, and that the licenses you will be declaring are accurate. Now is the time to chase after any unknown information in regard to sprawl or shadow IT that may have cropped up under your ULA.

This is important to do before you certify out in order to maintain control over the certification process.

Oracle may want to take the lead by offering to certify you and it’s important you don’t let them. This will give them control over a process that they didn’t want to happen in the first place, and they will take as long as they wish.

Get Control Over Your Software Spend

There’s no need to keep a toxic relationship going if all your partner does is take and take, and it’s the same with your Oracle ULA.

Perhaps at one point it served your company well but if the agreement has grown old and stale in your mouth then you should have the freedom to leave and explore your options, lest you be stuck paying for a ULA that is simply a waste of money.

At MetrixData 360, we have your back throughout every step of this process. We can help you conduct a self-audit to create an accurate depiction of your deployment and usage, we know how to talk to Oracle so that you don’t feel pressured throughout these seemingly one-sided negotiations. We will teach you how to keep your head above water in the event of an Oracle audit.

If you would like more information on how MetrixData 360 can help you through an Oracle ULA Certification, you can visit our Audit Defense page.