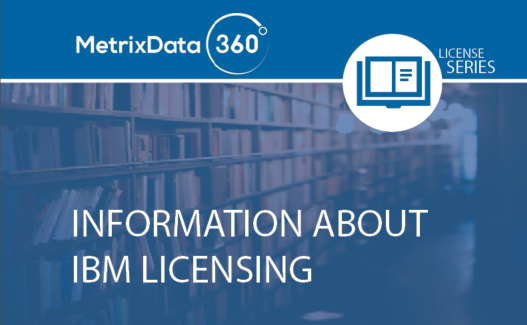 IBM licensing can easily overwhelm you, with so many different definitions and rules, it’s like learning a more complicated and even nerdier version of Klingon.

Where do you even begin?

At MetrixData 360 , we pride ourselves in diving deep into complicated licensing issues and understanding even the most complex scenarios. We often help our clients successfully navigate these complex terms. So, in this blog post we will go through a quick overview of IBM licensing for beginners because despite how it looks, software contracts don’t have to be a confusing affair.

There are many different types of users in IBM’s books:

Each Authorized User must have their own separate entitlements in order to access the Program in any manner directly or indirectly, such as through a multiplexing program, device, or application server. Authorized User entitlements cannot be shared with other people unless permanently transferred.

However, some IBM programs license devices so that they are considered users. In which case, any device that “requests the execution of or receives for execution a set of commands, procedures, or applications from the Program or that is otherwise managed by the Program” must be licensed as if that device were a person.

While the program may be installed on multiple servers, what‘s important is that you license your program based on the maximum number of Concurrent Users that have accessed the program.

So, if you have 1,000 employees — 500 working days and 500 working nights — as long as there’s no way they could overlap, then you only need to license for 500 Concurrent Users.

Just like with Authorized Users, there are programs that are licensed so that devices are considered users. Any device that “requests the execution of or receives for execution a set of commands, procedures, or applications from the Program or that is otherwise managed by the Program” needs to be licensed as if it was a person.

A floating license is connected to either a hostname/ID or a machine’s address.

A Floating License is for a single software product, which can then be shared between team members, with the number of concurrent users not allowed to exceed the number of floating licenses you have.

Resource Value Unit (RVU) is a unit of measurement with which IBM licenses its Programs. RVU Proofs of Entitlement revolves around the number of units of a specific resource that is used or managed by the program in question. Each program has specific RVU entitlements and in no way can you exchange, interchange, or aggregate RVU entitlements with that of another program.

Processor Value Unit (PVU) on the other hand is a unit of measurement used to determine the cost of licensing IBM middleware products, based on the type of processor that is on the server where the software is held.

The number of PVUs required is unique to the specific server and is based on the processor’s technology and the number of processor cores on a chip in the server. It is used for licensing at Sub-capacity, which brings us into our next topic.

Find Out How Much ILMT-as-a-Service Can Save You

Capacity and Sub-Capacity: ILMT and Me

IBM’s Sub-capacity licensing is an excellent way for businesses to save money. Essentially, using a PVU count will allow you to only partially license a server with an IBM product installed on the server. You will only need to license the individual processors that the product will use, based on the number of chips that each processor carries.

However, in order to make sure that the product doesn’t cross that invisible line and is installed across the whole server, IBM makes it mandatory for those using sub-capacity licensing to have ILMT installed.

ILMT is a tool designed to help companies conduct inventory and maintenance of PVU-based software that is licensed at sub-capacity. ILMT is a delicate dance and failing to play by all the rules when it comes to ILMT will leave you being licensed at full capacity during your next IBM software audit:

As confusing as IBM licenses its products, it no wonder that there are a few common slips ups people always fall into, such as:

Sub-Capacity Licensing proves to be one of the easiest mistakes for IBM customers to fall into. Sometimes customers do not realize they need to have ILMT installed in order to use sub-capacity licensing or if they have ILMT installed it is easily not accurately deployed or not deployed in all the areas it needs to in order to keep your company safe during an IBM audit.

This article only covers the tip of the IBM licensing iceberg, with so many licensing types and metrics, it can easily get overwhelming, which is why it is important that you don’t give the management to these licenses to just a single person, or worse yet, a single person who is already has a full-time role.

To effectively get the job done, you’ll need someone who can fully own the project (or a team depending on the size of your company).

Related: Hire a Software Asset Management Expert or Do it Yourself? The Pros and Cons of Each.

Get Your IBM Licensing Under Control

IBM licensing can be a tricky business but as confusing as it can be, it is important to understand these licensing requirements in order to adhere to them to the best of your company’s ability. Of course, there is no shame in feeling overwhelmed because this isn’t a one-person job.

Software asset management, especially for companies of larger sizes, can easily become the full-time job of a team of people.

At MetrixData 360, we’ve helped our clients out of the toughest software related issues, IBM being only one of our major successes. To learn more and find out how we saved one of our clients nearly 20% of their IBM budget, you can check out our IBM page.

Book a Meeting with Our IBM Licensing Specialist